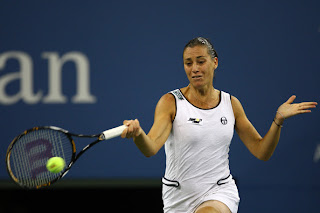 Greetings tennis maniacs,
After becoming the first Italian to ever be ranked in the top ten, Flavia Pennetta has been busy modeling racy clothes in Milan, and being interviewed by a sex-crazed Italian television personality for a television show called "Le Iene" (translate - Hyenas).
There's been quite a buzz in the blogosphere about this, and deservedly so.  I normally try to avoid the seedier side of tennis journalism, I really do, but this story was just too alluring to pass up. Her decision to do the show and to cooperate with the annoying interviewer shows how good-natured and playful Pennetta is - but while watching the youtube recap of this raunchy show, one can't help but feel bad for her.  That she had to endure this kind of unabashed sophomoric humor, and that she willingly took the bait and gave 'em what the wanted to hear, is both very entertaining in an "I can't stop watching that car crash" sort of way, and a travesty.
Note to Pennetta:  Fire your publicist.  I know things are different socially in Italy, but an athlete of your reach needs to realize that being on the equivalent to "Howard Stern" in Italy, a show that features porn stars and other miscreants, is not a great idea for you. A publicist needs to know this as well.
Isn't this the kind of sexist inanity that our evolving society is seeking to abolish?  It's mind-boggling.  So is this how the Italian media treats the first female tennis player to ever crack the top-10 in Italy?  Wow, talk about juvenile.  I just don't get it.  This is a serious woman here. A world-class athlete. And she's on a talk show discussing how many tennis players she's boinked?  What?
But lost in her racy comments about Carlos Moya and Marat Safin (by the way, don't make much of any of this, the interview featured Pennetta basically firing answers to yes or no questions, and, good egg that she is, Flavia was doing her best to make the interview fun.) was the fact that Pennetta isn't convinced that doping doesn't exist in tennis.
Hmmm....That one really opened my ears.  After reading so much about the strict enforcement of the drug policy by the ITF and WADA, I'm curious to know why Pennetta isn't convinced that the sport is totally clean. Is it just a hunch that was formed when looking across the court at a muscle bound Serena Williams, or is there some legitimacy to her sentiment?
If only her interviewer could have gotten his mind out of the gutter for a moment he might have elicited some candid remarks from Pennetta on the matter.  Unfortunately, he did not.
We now know that Flavia has made love on an airplane, but we do not know what she meant when she she said she thinks there is doping in tennis.
Thankfully, Pennetta may not have to answer more questions about her sex life in the upcoming weeks, but she can probably expect a few more about the doping issue.
Posted by The Fan Child at 10:30 AM 0 comments 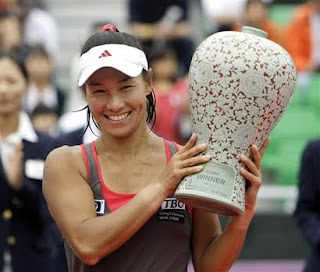 What next? Just when you thought it was safe to discuss something other than a comeback, a tennis dinosaur rises from the ashes like a Phoenix from the flame to vanquish two Sports Illustrated swimsuit models. And who said that the WTA is losing it's allure? It certainly wasn't me.

Kimiko Date Krumm, who once upon a time, during a two-year period in 1994 and 1995, went to the quarter finals or better in all four Grand Slams, has just won her first WTA title in 13 years, at the geriatric-by-WTA-standards age of 38.

While the milestone victory is astounding, it may not be enough to bring the legendary Billie Jean King out of retirement. Billie Jean King remains the oldest female player to ever capture a WTA title. Date Krumm turns 39 on Monday — She'll have to wait another 7 months and 24 days if she wants to wrestle that achievement from King's possession.

While most of the tennis media is focusing on the "back with a vengeance" Clijsters comeback and the "I'm not going to let another Belgian Woman outdo me" Henin comeback, we have relegated Date Krumm's refreshing return to the sport to the back burner — her results have been good but they haven't been good enough to make the Japanese legend a household name abroad.

But wins 286-289 of a career that has now spanned 20 years are finally getting the 5'4" trailblazer some well-deserved acclaim. The no. 155-ranked Kyoto-born Krumm, who gave a lot of credit to her race car-driving husband in her victory speech after defeating Anabel Medina Garrigues (6-3, 6-3) in the final, isn't ready to pull the plug after just one title either.

The former No. 4-ranked woman in the world thinks she's got a few more wins left in her. "I think I wont have any problem in my physical strength over the next five years," she said. "But I'm married...I have to have kids and I have a lot of things to do. I think I can play tennis for the next two years."

Krumm's comeback, which was originally announced (long before those Johny-come-lately Belgian girls) in April of 2008, probably had a large part in helping Kim Clijsters make up her mind about the comeback that she began after a 27-month absence this summer. While Krumm hasn't won a match in a Slam this year, she did nearly upset Caroline Wozniacki in the first round of Wimbledon. Her 8th career title, and first in 13 years, proves that she is getting better with experience.

And thanks to her exploits, and the dominoes that have fallen in the WTA as a result of them, we can talk about something other than who the "real No. 1 is." And if you happen to be, like me, getting up there in years, we've got a story that can help us realize that just because a player is half our age it doesn't necessarily mean that he or she is going to beat us, and it certainly doesn't mean that they are going to have more fun than us either, right?

With Fed in Action, Davis Cup is More Relevant 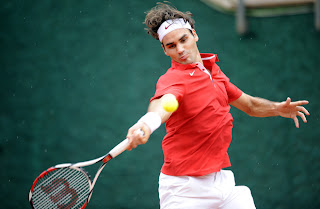 Greetings,
It's a mad world indeed when you have a guy that can serve 78 aces and still lose a match. It was a mad world even before the Croatia-Czech Republic tie got underway this weekend, but now that it's done, it seems even madder to me.
Radek Stepanek's sticktuitiveness opened the door for the Czech's and Tomas Berdych's perseverance cracked it open wide enough for the whole country to walk through. At least the tennis fans in the country. The rest came through when the doubles match was decided by an overworked but not over fatigued doubles team of Berdych and Stepanek, in straight sets.
And our final is set for December. The big bad Spaniards, who after demolishing the upstart Israeli squad with their two best players out of the action while mending their U.S. Open battle scars, have casually advanced to their second straight Davis Cup final. It is also their 5th final of the decade - a decade that started without them ever having made it that far.
Kudos to Spanish tennis for giving the rest of the national programs something to emulate over these last few years.
Speaking of emulate, Mr. Roger Federer decided to take a page out of the Spanish "all for one and one for all" book this weekend, and travel to Italy to make a long awaited Davis Cup appearance.
Federer put an end to fears that the Swiss team might be eliminated from World Group competition by turning in two shining straight set victories (both in live rubbers) against Simone Bolelli and Potito Starace respectively.
It may not seem like the biggest of stories, but Federer's participation in this weeks Davis Cup ties says a lot, both about Federer's current selfless mind state, and about the relevance of an event that has suffered greatly from the absence of big names and a narrow scheduling window that usually coincides with the conclusion of the Slams (ask Roddick about this).
The fact that Federer was willing to pack up the family and valiantly come to the aid of his country bodes well for next years Davis Cup World Group ties as well.
Forget about this years final, unless you truly believe in miracles, because the Spaniards are a pretty safe bet to take the title in Spain, on their surface of choice, no matter how much torture Radek Stepanek is able to endure.
But next year, with Federer in tow, it means we may have another weekend (hopefully 4?) of Davis Cup play that will be every bit as good as the one we just witnessed - and that has to be the best news of all for Davis Cup tennis.
Federer's return to action with his compatriots seems to be a symbol of a subtle philosophical transformation occurring deep within the bowels of his psyche. Maybe the pressure that was eating at Federer after his Australian Open tear-jerker of a loss to Nadal and throughout his desperate yet graceful quest to reach the ultimate pinnacle of the sport is truly and definitively long-gone.
After his loss to Juan Martin Del Potro, Federer was so graceful in defeat, and so unfazed by the emergence of yet another threat to his dominance, that it was easy to see that he is clearly a man who is ready to shift his priorities to the side of the scale where Mirka and the twins are nestling together - they are looking to him not necessarily for victories or records, but for humanity and for an all-encompassing intuitiveness that will ultimately outshine any single match or title that Federer will ever again achieve.
Federer, it seems, judging from his actions of late, recognizes the importance of his choices not only as a tennis player going forward, but also as a husband and as a father. While he is no doubt hungry and ready to contend for more titles, I think his days of crying about whether or not he actually wins them are behind him now.
And so we find him in Italy, employing his usual symphonic genius to ensure that the Swiss are a part of next years World Group 16 when Davis Cup play begins. Many of us are now speculating that this is the one tennis trophy that Roger will truly set his sights on next year. It is a competition that can be placed on the scale with Mirka and his daughters, with his family, friends, coaches, and his history, both as a player and as a human being.
For a competition that has had to endure a lot of disappointing absences by its top players, Federer's desire to take part next year could put an extra shine on the cup that many of us have been waiting to see for a long time.
Posted by The Fan Child at 10:13 AM 0 comments