After fighting off match point against Caroline Wozniacki in the semis, Na Li has become China's first Grand Slam finalist. 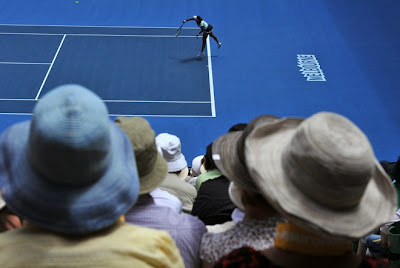 Yesterday's women's semifinal Between Caroline Wozniacki and Li Na started as a tense boring affair.
It didn't end that way.
Throughout the first set and a good portion of the 2nd set of yesterday's women's semifinal, Wozniacki was in complete control of this match. Li was going for big shots and missing them. Wozniacki was happy to keep letting her opponent deconstruct.
Wozniacki looked strong, almost impenetrable. It was the same maddening Wozniacki that escorted Schiavone to the door in the quarters. A Wozniacki that would not miss; that could anticipate the direction of her opponent's shots like a mindreader; that had the footwork and the stamina to make it all come together.
What we didn't know is that Wozniacki's greatest strength — her relentless defensive capacities — would later become her biggest weakness. Wozniacki's style caused her to leave her fate in the hands of her opponent. That fate was not kind to her last night.
When Li finally heated up yesterday, Wozniacki was left to the mercy of Li's sizzling Babolat.
Make no mistake about it — Wozniacki is the living incarnation of a ball machine. But there are certain times when being a ball machine is not enough. Playing to win by not losing is a good strategy for Wozniacki, but sometimes, in certain circumstances, it hampers her as much as it enables her.
Oh, but she is good. And clearly capable of going all the way in a future Slam, in spite of the loss.
Wozniacki patrols the baseline meticulously, and she's the quintessential retriever. She's adept at stringing her opponents out — frustrating them with her precision and her conditioning, and letting them hang themselves with infuriated attempts at winners.
That was the gameplan that Wozniacki enacted flawlessly yesterday.
Until, at 6-3, 5-4, Wozniacki's fortunes changed.
Here was the Great Dane, the kangaroo-fighting Dane, in Stella McCartney attire, about to serve for the match.
Here was all of China — journalists, dignitaries, and the like — cancelling their flights to Australia for the weekend.
Li, a 28-year-old, and the first ever Chinese top-ten player, about to be boxed out of making history by a young kid who would not miss.
40-30: Match point, Miss Wozniacki.
Wozniacki served a somewhat ugly first serve into a vast ocean of net.
Then Li wallopped a forehand down the line that Wozniacki shanked softly behind the ball boy.
Deuce.
Just like that, a battle had materialized from the ashes of a drubbing.
Finally, here was the drama — the drama that had been absent for nearly two sets.
Now you could see and feel Li Na's desire. The body language she sent to her husband/coach was more constructive.
Suddenly the invincibility, the sheer ruthlessness of Wozniacki's game dissipated. Perhaps she was tired or nervous. She wasn't much worse, but she was never the same.
Was she tired? Yes. Did she choke? That would be harsh to say.
What we can say is that when Wozniacki dropped her level, the door swung wide open for Li.
Chances are few in matches of this magnitude. In Li, China got to see how amazing you have to be to get to Grand Slam final; How you have to have nerves of steel and the mental toughness of a shaman. And a little luck to boot.
After the match, a happy Li spoke about what it's like to compete against a juggernaut like Wozniacki. "I was feeling some shot I can hit winner but every time she was just back on the ball, back on the ball."
As far as her chances in the final, she's not overly concerned. "Of course it's tough match," said Li, "Tennis never have the easy."
So right she is.
Posted by The Fan Child at 11:12 AM