Roger Federer has thumped Stan Wawrinka in 6 of 7 previous meetings, but they've never met in the quarterfinals of a Grand Slam -- until today. 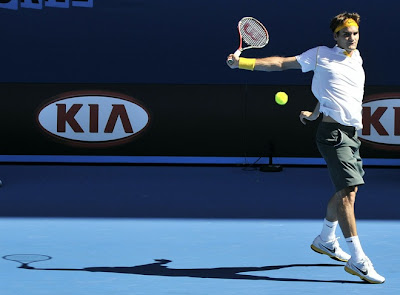 Okay folks, it's been nice putting out all these blog posts on the Australian Open and pretending I know what I'm talking about when it comes to tennis. Now comes the time where The Fan Child will put his money where his mouth his. As the quarterfinals are set to begin, allow me to wax poetic on who is surely to advance to the semis.

Without any further ado, here are my quarterfinal quick picks:

In my humble opinion, this is the easiest of today's four matches to handicap. The German — and her sassy dancing alter ego — have come a long way in the last six months. Petkovic has had some big breaks at the Slams, benefiting from a 3rd-round walkover in the 2010 U.S. Open and a 3rd-round retirement (Venus) here in Melbourne as well, but the real reason she's playing her first Grand Slam quarterfinal is that she's earned it.

She denied that her 4th-round win was the best match of her career, but given the importance of the match, and the Grand stage is was played on, I'll politely disagree with her. The defeat of Maria Sharapova was a HUGE WIN for Petkovic, and it will do wonders for her going forward.

Unfortunately, a very formidable opponent awaits her in the quarterfinals. Na Li's shock-and-awe baseline game will force Petkovic to move, and move in a hurry. Does she have the footwork and the firepower to hang with Li? Hard to say, because they've never met before, but something tells me it will present a challenge for Petkovic that she isn't quite mature enough to handle.

Two days ago I announced to the world on Twitter (and maybe three people saw it) that not only was Stan Wawrinka going to beat Andy Roddick, he was also going to follow through on that win and take out Roger Federer in the quarters.

Damned if I don't want to go back on that pick so bad, but it's not my style, so let me present my compelling argument on why Stan the Man is going to get it done:
No matter what happens, watching the Swiss exchange cross court backhands will be like watching Matisse and Monet painting scenescapes under the influence of absinthe in a Paris park. It'll be great, is what I'm trying to say.

My heart says yes but my brain says no. Oh, Francesca, you goddess, how will you even tie your shoes after what you went through on Sunday? And yet, we know your shoes will be tied, and there you will be against that fresh-faced kangaroo-fighting Dane. True, you have more gumption in that big vein in your right arm than Wozniacki has in her whole body, but will that gumption be enough to get your old bones moving again? (More compliment for Francesca than insult to Caroline, please note.)

As far as Wozniacki goes, she's done everything that's been expected of her here in Melbourne, and more. She's been hilarious with the press, she's been her usual steady self in four straight set wins, and she's a big match player who will look to outsteady the passionate Italian.

Will the fact that Schiavone had more winners in her fourth-round match than Wozniacki has hit the whole tournament bother the Dane? Doubt it.

Will the fact that Wozniacki will get more magazine covers than Schiavone no matter who wins the match bother the Italian? Doubt it.

After Schiavone's straight set win at the 2010 French Open, she has endured two straight losses to Wozniacki, but you can throw history out the window here, as this match will more than likely take on a life of its own.

Oh, god. After a long day of dream matches, we get the dream to end all dreams in the night session. Two red-hot players itching to make a run at the top of the game. We know what type of tennis Djokovic has been playing of late, and even though he was defeated by Rafa in New York, he gained a lot of confidence by pushing him, and by finally overcoming Federer in the Semis.

Could this be the year that Djokovic steps back into the limelight and stakes his claim as a legitimate consideration in the Grand Slam title game? Or is he destined to endure another year of settling for second bests, gripping defeats, and playing out his days in the shadow of Rafa and Roger?

Meanwhile Berdych, left for dead by so many critics after his autumn snooze, has rediscovered his game. The imposing Czech is once again steamrolling opponents in the same Blitzkrieg fashion that he layed much of his would-be competition to waste in the 2010 French Open and Wimbledon. And let us not forget, it was the Wimbledon semis where Berdych got his first career win against Djokovic.

Now, after decisive losses in Davis Cup play and at the World Tour Finals, Berdych will take aim at his rival again, with a trip to the Semis at stake.